Hunter Truck’s former President Bob Hunter was recently honored with the PAA Lifetime Achievement Award for his service on the Pennsylvania Truck Dealers (PTD) and on the PAA Foundation Board of Trustees. Read the full press release from PAA, written by Melanie Stine, below: 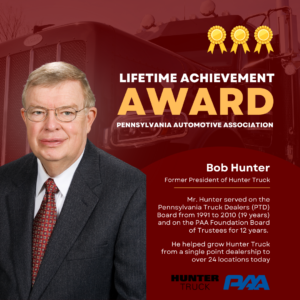 Mr. Hunter has been involved in the industry since he joined his father in 1963 at the family’s International Harvester dealership and service center in Eau Claire. He held numerous management positions and became president and dealer principal in 1982.  Together with his brother Harry, Robert Hunter helped grow Hunter Truck from a single point dealership to over 24 locations today, with International and Peterbilt heavy-duty truck sales, service and leasing.

Mr. Hunter served on the Pennsylvania Truck Dealers (PTD) Board from 1991 to 2010 (19 years) and on the PAA Foundation Board of Trustees for 12 years.  He was a founding dealer of Idealease, the third-largest heavy-duty truck leasing and rental company in North America and served as Chairman of their Board of Directors on two separate occasions. 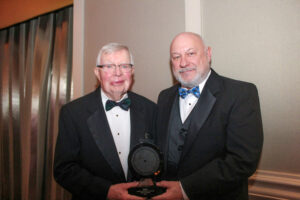 “Bob always voiced wisdom and generous guidance at every meeting,” says John Devlin, president of the Pennsylvania Automotive Association. “He has made the heavy-duty truck industry in Pennsylvania what it is today, and is not only a true leader but a generous philanthropist.”

Over the past ten years, through the Robert and Gail Hunter Foundation, he has donated over $1 million to his local community.

Mr. Hunter’s career has been rich in both successes and accolades. In 2006, Mr. Hunter was recognized as the Dealer of the Year by American Truck Dealers (ATD) for his many contributions to the industry and to his community. A video tribute to Mr. Robert Hunter can be found online at www.paa.org.